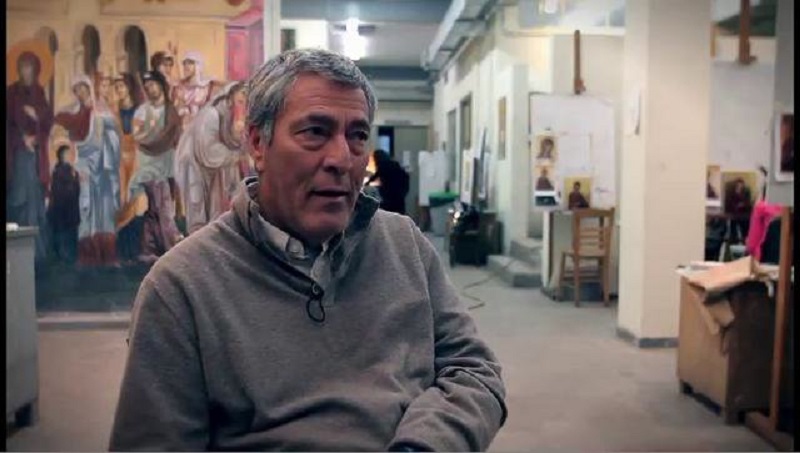 He was born in Athens in 1948. From an early age, he took up traditional and icon painting. He attended preparatory courses at Panos Sarafianos’ studio and entered the Athens School of Fine Arts in 1969, where he studied painting under N. Nikolaou and Y. Moralis, until 1972. He presented his first solo exhibition in 1978 (Zoumboulakis Gallery, Athens). From 1978 to 1992, he lived and worked in Paris, where he was largely influenced by Yannis Tsarouchis, among other artists.
His painting is representational and, mainly, anthropocentric. His subjects are drawn from day-to-day life, but are rendered poetically, with an almost surrealistic sensibility. People, places and objects are being converted into symbols, and form parts of dreamlike narrative compositions, often with erotic connotations, or in a nostalgic vein, reminiscent of fairytales. Elements of Greek tradition can be detected in the largest part of his work, along with features of modern Parisian art. As part of his icon painting oeuvre, he has created frescoes for Greek churches, as well as many portable icons.
Since 2000, he teaches at the Athens School of Fine Arts, where he is currently an associate professor and head of the Studio of Fresco and Portable Icons’ Technique.
He has presented his work in more than 25 solo exhibitions in various cities of Greece, as well as in Paris, London, New York (retrospective), Hanoi, etc. He has also participated in important group and international exhibitions in Greece, France and other parts of the world (Europe, Asia, America, Australia, et al.).