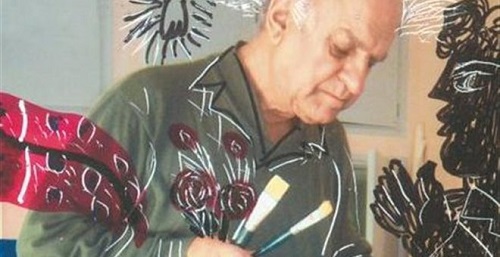 He was born in Athens in 1935. He studied violin at the Athens Conservatoire and painting at the Athens School of Fine Arts under Yiannis Moralis (1955-1960). Shortly after his first solo show in Athens (A23 Gallery, 1960), he went to Paris on a French state scholarship. He studied lithography at the Ecole des Beaux-Arts, under Clairin and Dayez (1962-1964). He finally settled in the French capital, where he lived for 35 years, keeping, however, an equally close relationship with Greece.
The particular features of his art were gradually developed during his stay in Paris, where he had the opportunity to familiarize with the modern artistic trends of the 1960’s, among other things. However, unlike other Greek artists of his generation, he did not clearly embrace any of the European avant-garde movements of the time. He remained faithful to figurative painting and his Greek heritage, maintaining all along his respect for the lessons of the ‘30s generation, his love for Greek art (ancient, byzantine, folk) and his strong ties with the true Greek environment experience.
The human figure is his main subject, which is at first rendered with a deliberate simplicity, but with time, it progresses and becomes a dominant presence in space; his drawing style is schematized with clean-cut, clear outlines, and his compositions are flat with minimal shading. The colour is often spread intensely and evenly across the surface of the form, attributing in the image an impressive monumentality, with a poetic rather than a realistic effect. The patterns occasionally appearing in his paintings, both the purely anthropocentric ones (cyclists, smokers, romantic couples, et al.) and those describing objects or spaces, spring from a familiar everyday life, which, however, acquires a mythical dimension, especially when there are direct references to figures from the Greek mythology.
He has illustrated books of well-known poets and writers in Greece and France (Elytis Tachtsis, Cavafy, Aragon, Apollinaire, et al.). He has also designed posters and stamps. He worked as a stage and costume designer with the National Theatre of Greece, the Karolos Kuhn Art Theatre (Theatro Technis), and other troupes, in performances of ancient Greek drama and modern plays as well. He has also published his own prose and poetry. In 2000 he created artworks for the ‘Metaxourgio’ metro station in Athens. Four films on his oeuvre have been released (Greek and French productions), and several monographs have been published. In 1999 he was awarded by the Athens Academy, and in 2010 and he was honored with the Legion d’Honneur medal (Officier des Lettres et des Arts) by the French government.
He presented his work in more than 70 solo exhibitions in Greece and in many European cities. His last retrospective exhibition Fassianos: Mythologies of Everyday Life was held at the Athens National Art Gallery in 2004. He participated in several group exhibitions and international art events in Greece and other parts of the world (Sao Paulo Biennale, 1971; Venice Biennale, 1972; Europalia, Brussels 1982; Biennial of European Graphic Art, Baden-Baden 1985, et al.).
Close