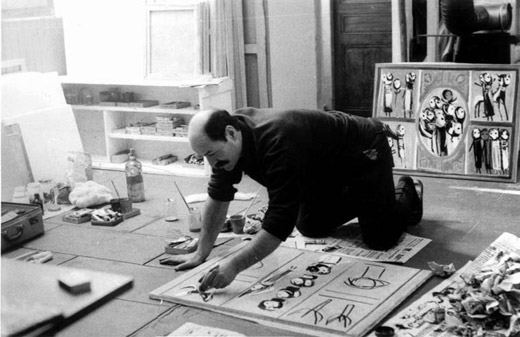 He was born in Athens in 1984. Although he studied at the Athens School of Fine Arts during the 1940’s, with Konstantinos Parthenis, he painted more outside the School, and he was one of the earliest modernist painters of post-war Greece. He presented his first solo exhibition in 1945 at his home and studio in Athens, while the second (Parnassusgallery, 1947) caused a stir and various negative reviews, because of the audacious form of the works, which already contained surrealist, cubist and abstract elements. Being oriented towards the European avant-garde movement from the start, he became a founding member of Alekos Kondopoulos’ group Akraioi (1949), with whom he participated in the Sao Paulo Biennial in 1953.
In 1954 he moved to Paris, funded initially by a scholarship of the Holy Foundation of Evaggelistria of Tinos. He becomes familiar with modern trends and participates in the European art circles. In 1959, in Rome, he joins the group Gruppo Sigma, along with Caniaris, Kessanlis, Kontos and Tsoklis.
In the early ‘60s few figurative images begin to appear in his abstract (until then) gestural painting. Gradually he will shape his most distinctive feature, the little man(anthropaki); the trademark of his new, entirely personal, neo-figurative painting, which made him well-known internationally. His identical little men (anthropakia), symbols of the middle class propriety and alienation will dominate his work since, in several variations, often as wooden constructions, utilitarian applications or artistic happenings. The painter’s little man starred in the film Gaitis le Baladin (1971) in collaboration with director Serge Bergon.
Throughout his career, he developed a large exhibition activity abroad and in Greece, where he returned permanently in 1974. His work gained enormous popularity (in spite of his critics), thanks to his peculiar artistic idiom, his outstanding productivity and his persistence to bring his art into contact with the broadest possible social strata in every way imaginable. He would certainly be glad that his little men have been placed in the Athens metro station ‘Stathmos Larissis’.
He died in 1984 in Athens, a week after the opening of his major exhibition at the Athens National Art Gallery. The bilingual edition Yiannis Gaitis: Kritikos Katalogos/Catalogue Raisonné (Angers, 2003), edited by his daughter, Loretta Gaitis-Charrat, is a comprehensive, all-inclusive monograph of his work. In 2006, a retrospective exhibition was organized at the Benaki Museum, Athens, while the last monograph on his work was published in 2009.