Cacao Rocks was born in Athens Greece in 1985. He grew up near the harbor of Piraeus, raised by a French mother and a Greek father. At the age of 12 he moved to the island of Corfu where he spends his adolescence. Back in 1999, hip hop, skateboard culture and the surroundings of the island influenced him and led him through to discover his passion in arts. That was the year he started experimenting with graffiti. In the same period of time a graffiti contest was held by Greenpeace in Corfu, in which he participated and won first prize. From that moment on until 2003 he was devoted to this form of art and created numerous graffiti pieces and lettering by using spray cans. In 2004 he moved back to study French Literature in the Philosophy School of Athens. Due to the fact that he had to commit to his studies he decided to make a pause in public space arts and constructed sculptures made off polyurethane, wool, wood and found objects. After an Interrail trip in Europe that gave him the urge to carry on as an urban artist, inspired in a great scale by the European scene, he started to craft street art again. Because of lack of resources, his materials this time were quite different. He used duck tapes and found objects in the streets in order to form installations and sculptures. In 2009 the Greek magazine FREE mentioned him as the new star of Greek Art. Meanwhile he started to experiment with video art. In addition to that one of his projects was rewarded in 2011 in the national film festival Shoot It with a scholarship in Focus School of Art, video and photography winning the first prize. Finding himself in a very productive period he started painting all over the city having spray cans used again as a media. All the while he created a blog in which he published a drawing every day in order to make a whole year calendar. He had exhibited his work in galleries and museums in Athens such as Benaki Museum and Onassis Art Foundation, in the UK, in Italy, in USA etc. and participated in Street art and Graffiti festivals in Greece and abroad. Additionally, international media were closely interested with his work such as New York Times, Reuters, The Huffington Post, BBC Channel, French TV Chanel France 3 and Arte and German TV channels as Das Erste and 3SAT.

In 2016 he did his first solo shows at Dio Horia Gallery in Mykonos and Borgia- Art in Zurich. The same year he created the wallpaper for the WeTransfer website and started giving lectures at the University of Michigan and other educational institutes.

Recently he was on the cover of National Geographic’s Traveller issue which mentioned him as Graffiti Guru.

2017   “MEDITERRANEA18”, Biennale of young artists from Europe and the Mediterranean, Tirana, Albania

2015   “The Street Is My Gallery”, National Hellenic Museum, Chicago, Usa

2016 WeTransfer, workshop of the employees of the WeTransfer company, Amsterdam, Netherlands 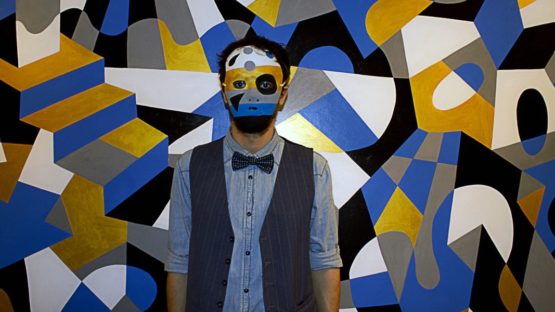