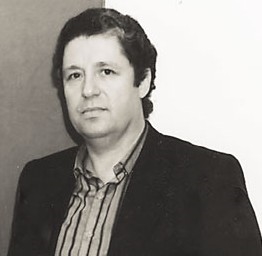 Born in Athens in 1938, he studied painting at the Athens School of Fine Arts (1959-1963) under Y. Moralis, at the same time practising fresco and stage design. In 1965-66 he received a Greek State scholarship and travelled to make a systematic study of ancient, Byzantine and folk art. In 1966 he taught freehand drawing at the Centre for Technological Applications, before going to Paris on a French State scholarship to study at the École des Beaux-Arts (1967-68); staying on in the French capital, he attended classes at the École Pratique des Hautes Études and the Ecole du Louvre until 1974. In his early years in Paris he practised mainly printmaking.
He presented his first solo exhibition at the Ora Cultural Centre in Athens in 1971. In his early works he paints still lifes and compositions with objects. Referencing Morandi, de Chirico and Carra and equipped with the legacy of Greek art, he develops a personal idiom characterised by sensitive tones, an inner lighting and an artificial perspective. The games with perspective create a mystical atmosphere which turns the realistic depiction into metaphysical poetry. This transition becomes more visible as his work progresses: the conventional representation of everyday objects, archaeological finds, statues and ruins is combined with the representation of esoteric-imaginary landscapes. The artist traces the relation between the visible world of matter and the invisible one of the mind, and at the same time the relation between past and present. His quests go beyond painting, as engraving, drawing, stage design and micro-sculpture have a significant place in his work. In 1984 he was honoured with the Drouant-Cartier Award for his entire oeuvre.
He had many solo and group exhibitions in Greece and abroad. In 1979 he took part in the Biennale of Sao Paolo. Retrospective exhibitions of his work were organised in 1984 (Rhodes Municipal Gallery), 1990 (Vafopoulion Cultural Centre, Thessaloniki) and 1994 (Patras Municipal Gallery). Works of his can be found in the National Gallery, the Averoff Gallery, the Kouvoutsakis Gallery, the V&E Goulandris Museum of Andros, the Musée d’Art Moderne in Paris, the Bibliothèque Nationale of Paris, etc.
Close