He was born in 1925, in Hydra. He settled with his family in Piraeus in 1937, but every summer he returned to Hydra, where he began to paint. In Hydra, he also met Hadjikyriakos-Ghikas and Pikionis, whom he considers his indirect teachers.
In 1940, Klaus Frieslander gives him his first painting lessons and then continues his studies at the Athens School of Fine Arts (1943-1949). A year before graduating, he presents his first solo exhibition, (Romvos gallery, 1948). In 1951 he begins to teach as assistant at the Freehand Drawing School of the National Technical University Athens, with N. Hadjikyriakos-Ghikas as head professor.
He continues his studies in Paris (1953-1956) on a greek state scholarship (I.K.Y.) where, among other courses, he attends engraving with Ed. Goerg at the Ecole des Beaux Arts. When he returns to Greece, he settles in Athens, where he works until today, sharing his leisure time between Sifnos and Hydra.
The painting topics with which he worked in Paris (Slaughtered Animals, Laundress, Football, etc.) were presented in Athens (Zygos gallery, 1958), with an exhibition/turning point in his career. It was evident from the outset that his painting had assimilated abstract and modernist characteristics, remaining, nevertheless, figurative. His choice of subject matters, in his works ranging from his large compositions of multiple people to the Portraits of Friends, Seas and Still Lifes, act merely as excuses for highlighting the pure painterly values.
In his long career, he utilized the compositional, colouring and expressive capabilities of oil painting, but also those of pastel, watercolour and ink. Light characterizes the structure of the composition, as an integral component of colour, even in his black and white works, and especially in his engravings, with their rich shades of black. 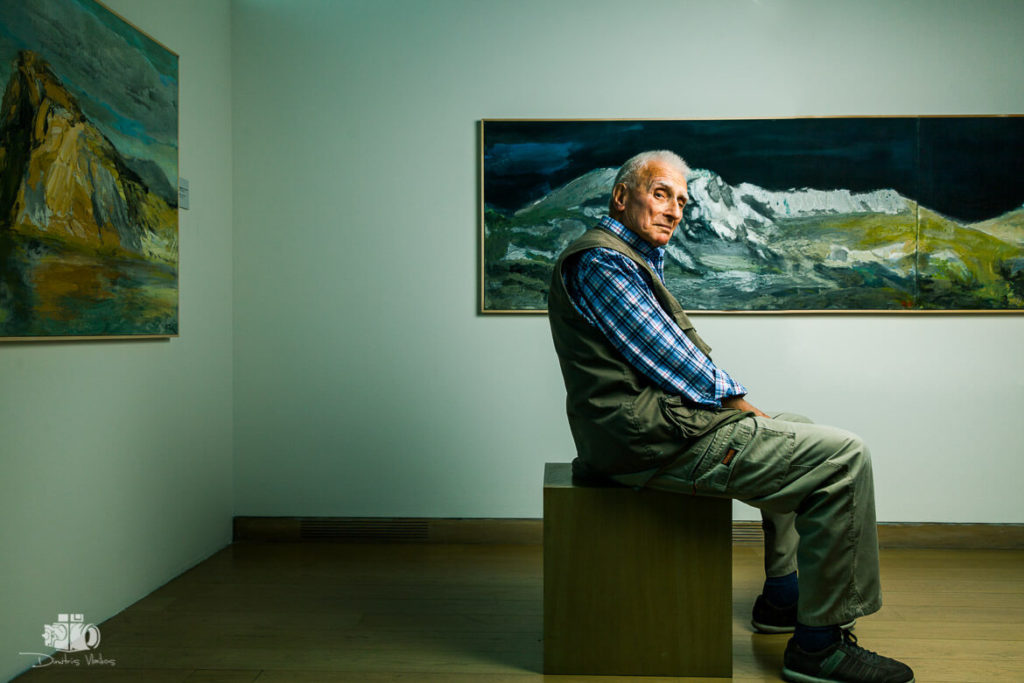 He taught in the Designers Dept. of the Athens Technological Group (1959-1962) and was co-founder and teacher of the Independent School of Fine Arts (today Vakalo College of Art and Design) along with Helene Vakalo, As. Bacharian and F. Francescakis (1958-1976). He was elected professor at the Athens School of Fine Arts (1976), where he taught until 1991 (chancellor since 1989). In 1993 he became a member of the Academy of Athens and in 1999 and was awarded the title of Grand Commander of the Order of the Phoenix.
He has held more than 90 solo exhibitions and has numerous participations in group exhibitions in Greece and abroad. He participated in the Sao Paulo Biennale (1957) and the Alexandria Biennale (1959). His retrospective exhibition, 35 years of painting (Pieridis Art gallery, 1992), was also presented at the Municipal Galleries of Mytilene, Patras, Kalamata, Chania and Rhodes. More retrospective exhibitions took place in the Athens National Art Gallery (1999), Florence, Cyprus and elsewhere.
Four books with his writings and several of his articles have been published.
Close