He was born in Filiatra (Messinia) in 1930. He studied painting at the Athens School of Fine Arts (1949-1953) with Y. Moralis. In 1954, he went to Paris on a French state scholarship. He returned to Athens in 1955 and worked in advertising and the theater until 1958, when he left again for Paris, on a 3-year greek state scholarship (I.K.Y.) and settled there permanently. His artistic progress was largely influenced by the innovative atmosphere of the ‘60s, and especially by the New Realists and Pierre Restany, characterized mainly by his switch from conventional canvas painting to the use of cheap everyday materials of modern civilization.
He chose as his primary material the printed paper (mostly by posters), cut into fine strips with the use of a machine (affiches massicotés). The layout of the strips forms undulating surfaces, where colours and material unite. The first results of this work were in abstract form. But when he fully evolved his technique, he began to use it in order to create figurative images or objects in three dimensions, at the extent of visual illusion. Occasionally he has used other materials as well, such as steel wool or bolduc ribbons, always with the same craftsmanship and inventiveness. He also created environments and spatial installations (Curtains, Columns, Forest, Flags, et al) and visual art events with the participation of the public. His elaborate and imaginative images often negate the material aspect of their construction, subjecting a metaphysical sensation. 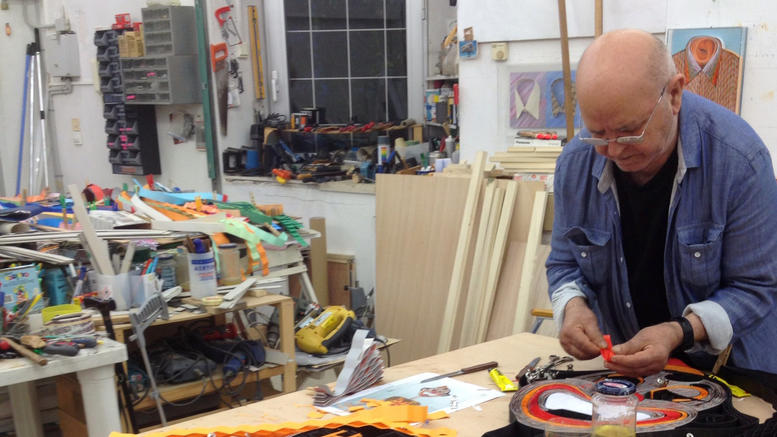 His first solo exhibition was held in Paris (Galerie J, 1964) and has since worked with major European galleries (Sonnabend, Iolas, etc.). After his first solo exhibition in Athens (Goethe Institute, 1971), he holds exhibitions in Greece regularly. He participated in significant events that highlighted the Greek avant-garde art scene abroad, such as the Avantgarde Griechenland (Berlin, 1968) and Eight Artists, Eight Attitudes, Eight Greeks (ICA, London, 1975). He represented Greece in the 1980 Venice Biennale and also participated in the Europalia festival (Belgium, 1982). In 1997, his retrospective exhibition was organized in Thessaloniki (Macedonian Museum of Contemporary Art), and was also presented in Athens (ASFA Factory). His project Football Players is located at the ‘Omonia’ station of the Athens Metro.
Close