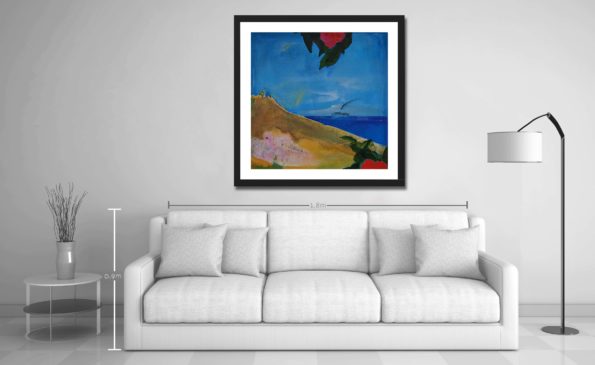 This product is available. Price:
€400.00 Description:

Manolis Charos presents a series of new paintings depicting a journey to the island of Kythera. Blurring the boundaries between fantasy and reality and imbued with intensely personal imagery, the works represent the island as an eternal destination, sought by many but reached by few.

Kythera – the island of celestial Aphrodite represents a totality of the past and present – the harsh roughly hewn beauty of the landscape formed over centuries by the driving winds raging down the Kythrian straights, to the still calm of white-washed houses, punctuated with flora and fauna of such richness that the island becomes almost utopian in its appearance.
Charos’ images initially capture a pilgrimage to the island, with a series of largely abstract compositions, which include various figurative motifs such as ships in passage – plumes of purple smoke rising in the distance. Hyper-real in their intensity, with vibrant pulsating colours characteristic of much of Charos’ work – the viewer is privy to snapshots of the journey, which on first appearance seem to fulfill the idyllic fantasy of a search for Kythera – Baudelaire’s ‘…banal Eldorado’. However, on closer inspection the paint- ings also capture and convey a sense of unease and impending tragedy, drawing on the tumultuous history of the island and its surrounding waters.
As the exhibition enfolds, the viewer is able to appreciate the innate beauty of the island through a series of paintings, which convey both natural and man-made iconography of the land in all of its mystical and ageless charm. Charos’ graphic sensibility combined with an innate sensitivity to the nuance and delicacy of the island’s imagery is conveyed formally through a layering of washes and digital collage technique, which adds a unique complexity and depth and further vibrancy to a palette of intense richness.
The series ends with a number of night scenes; dark, brooding and melancholic. The journey completed, the viewer leaves Kythera enriched from the experience yet longing for more and destined to make the pilgrimage again and again to the island known as the eternal destination.

“I am not always ready to discuss the significant and signified. I think my job is to do a good piece of art. And a good work of art, above all is a vehicle that will convey the sensibilities and thoughts of the viewer. Otherwise it is nothing. It is a study that concerns only me. What moves me in art, are the birds. For the viewer, it’s the beginning of a concept. This is the game of art. Our effort does not exist without the viewer. The work of art without the eyes that see it is non-existent. " Source: tovima.gr
SKU: Νο 1150 Categories: Eshop, Silkscreens, Collections, Silkscreens Tags: Kythera, Manolis Charos, silkscreen