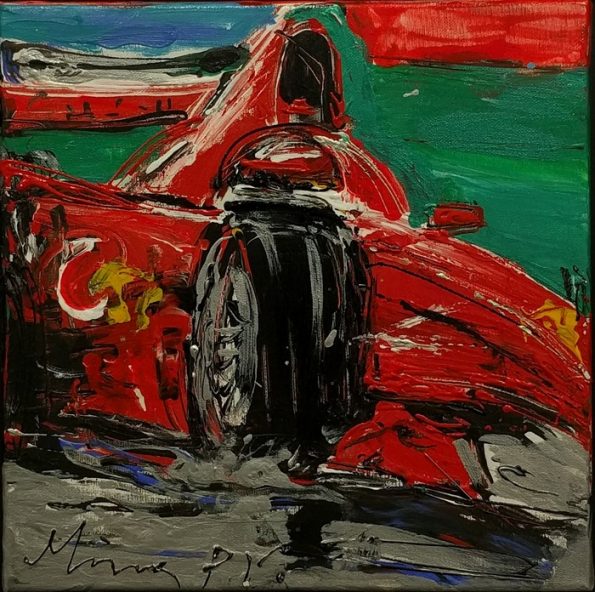 The works of Mina, wherever I see them, along with others, I recognize them from afar, and this “authenticity” at a time of similarity, counts a lot.

The racing cars shape and the speed configuration have been one of Mina’s interests since she was a student, prompted from her visits to Monte Carlo and the Formula 1 Grand Prix. It is there that she was inspired to study the grandeur of movement in regard to the particularly well thought out design of an object which through its perpetual development becomes a technological state of the art.
This is how the subject of the series ‘Formula’ was born. The color here gives the speed pulse and from a means of expression becomes a means leading to freedom. The steady lines of her composition manage to address not only to the optical nerve but to the acoustic one as well since the spectator listens with the eyes the deafening motor sound and the monstrous rubbing of the tires on the tarmac.

In Mina’s works, the imprinting of reality is expressed both by the sure design, structured composition and intensity of colors, and by the substantive truths of the objects. The expression of abstract, fully respects the integrity of the form but also the image as a whole, while conveying the message of an emotional expectation. Absence in this case, serves the idea – both in the sense of the archetypal and – as it is universally joined by the polarized palette of color.