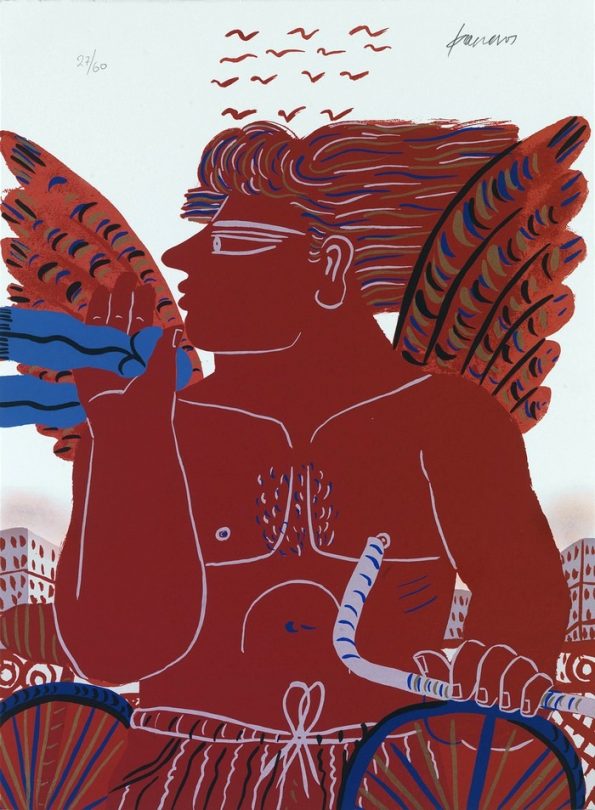 This product is available. Price:
€750.00 Description:

Silkscreen hand signed and numbered by the artist. Edition of 60 prints

From a young age, I read poetry and liked writing novels and poems. Back then, I didn’t even know how to paint. At some point Elytis invited me to paint him. When I showed him my work, he told me … “You did not capture me! You just do whatever you want ” But that is the norm. Everyone expresses things their own way and has his own character. Not everything is shown! One day I remember when I was with Tachtsi, I met Seferis, who sent me to Embirikos 40 years ago. Emperikos knew both painters and poets.

I didn’t portray the poems "word by word". I did not imitate the poet's words. I read them and portrayed them in my own way. For example, when I had to illustrate the National Anthem, I didn’t want to ruin it. So I painted on the edge of the book, around it. It has two engravings at the beginning and a painting on the sidelines. In the catalogue, of which an excellent work has been done by Mrs. Karapidaki, there are the books of the Mossandreou collection. There are some overseas as well, nut mainly Moschandreou has the most.   I would also like to point out that when I was young, in the School of Fine Arts, professors kept saying "Do not look at the poets. Do not deal with them. They do what they want, they have great imagination!  "However, I was intrigued by the poets, and they appreciated me and promoted me. And I showed them too and illustrated their poems with freedom, respecting their imagination.   Something else that I think sticks out is "Rebetika, Douze chants rebetiques". You know, there is no French word for the word "rebetika"(a type of Greek music). Of course we understand what we mean but the French and other foreigners do not know. So, in a way, we also promoted this Greek music. Source: axiaplus.gr
SKU: Νο 3097 Categories: Eshop, Silkscreens, Collections, Silkscreens Tags: Alekos Fassianos, Red Cyclist, silkscreen